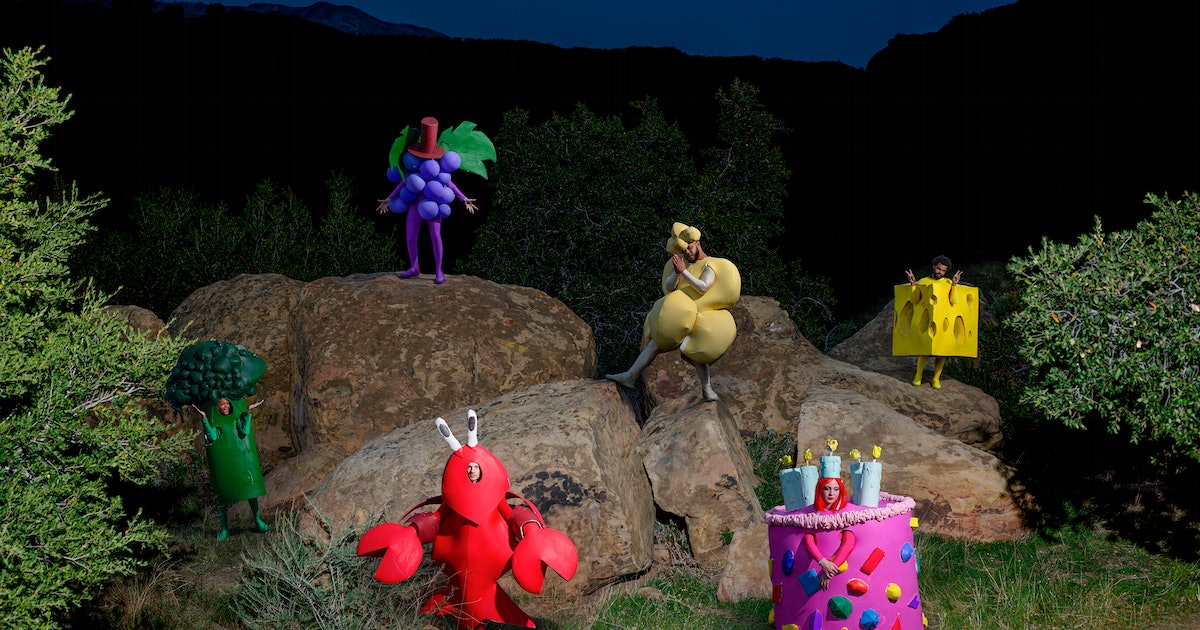 Before the world knew Dylan Brady as half of 100 gecs, there was Dylan Brady, and a crew of friends and other musicians in St. Louis, as Cake Pop.

Brady, Lewis Grant, Ravenna Golden, Aaron Cartier, Pritty, Robel Ketema, Kevin Bedford, and Adam Newcomer formed the group as a practice space of sorts, in which they could experiment with their ideas of what pop music can or should sound like. Back in 2015, they released their self-titled debut body of work together, a minimal soundscape of bright electronic bloops and meme audio snippets. Now the group has shared their newest album Cake Pop 2 via Mad Decent.

Over 10 tracks, they build on their playful vision of pop, now bolstered through the cultural lens of hyperpop. It’s fitting that their band is named after a dessert because the music is exactly like it: sugary in all the right ways, with their vocals in a constant artificial Auto-Tune.

The friends recorded the album during a manic 4-day jam session. Below, they reconnect to discuss each track, and candidly share their memories of putting the project together.

Lewis Grant: Can anyone recommend a good dentist?

Dylan Brady: Ravenna did this first take all in one go. Lewis can yell really loud.

Adam Newcomer: Every good song is telling the truth about something…

Kevin Bedford: I’d suggest a healthy helping of daddy’s drugs listening to this.

Grant: I like to think of all of us in a clown car heading to prom.

Grant: I remember we bought two gallons of Schnucks pink lemonade before we made this one.

Cartier: I think we recorded this in a movie theater.

Bedford: Too $hort gonna go crazy when he hears this one.

Grant: Ravenna ate this up tbh.

Grant: “Candy Floss” might be my magnum opus… Can’t wait to play it on the main stage of EDC… They’re gonna love it.

Bedford: The movie is Lewis Grant.

Grant: Those puppets are my best friends.

Cartier: Still tryna figure out how it got like this.

Pritty: I sound so toxic here…

Bedford: This shows me the future of music is in good hands. There’s a Cold War on real pop music & Cake Pop 2 just won it.

Grant: I play this song at such loud volumes that I’m under investigation by the FBI for possibly using otherworldly technology.

Grant: We found the sheet music to the end of this song in a glass bottle at the bottom of an old well.

Robel Ketema: What’s nicer than writing a poem in icing for someone? Rav’s song naming skills.

Grant: I’m going to move to the middle of nowhere and start making wooden door knobs on a lathe, singing a musical I made in my head that no one will hear…

Brady: Finally figured out how to use an augmented chord.

Cartier: Twitter make me anxious too fr. Doin the most on there smh 😒.