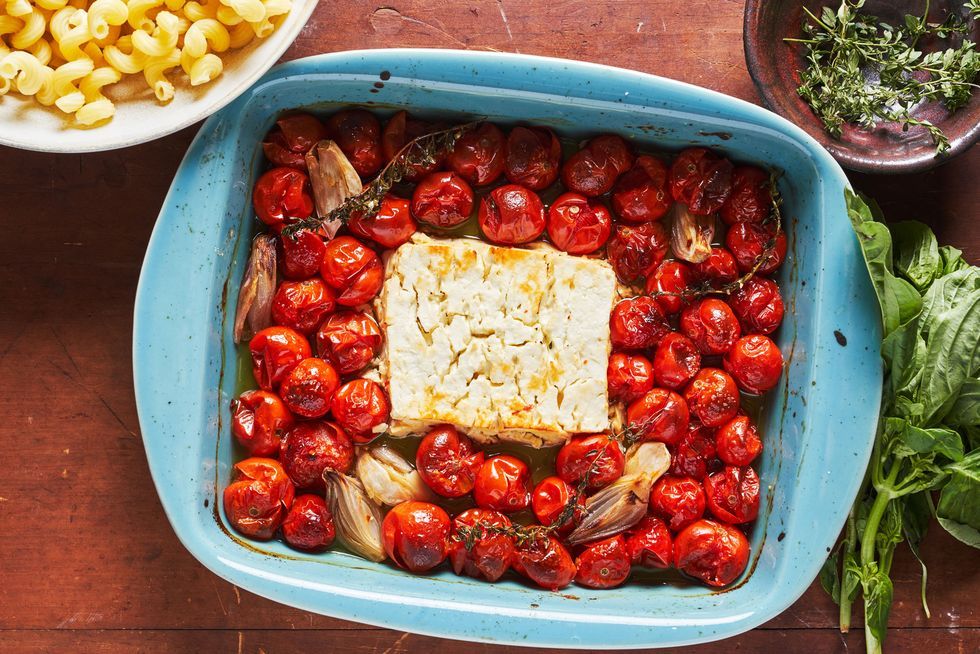 Tik-Tok has been trending for the past couple of weeks with the new delicious simple fast unusual recipe for Baked Feta Pasta. This shook people off by how it is made, and how it looks. It looks like a bunch of cherry tomatoes without being touched just placed around the edges nearby a block of feta. The most shocking thing that people reacted to this was how surprisingly delicious it was and how simple it is to make. The person who started this from the beginning was a blogger named Mackenzie Smith who shocked the world with the video of the recipe on how to make this. Get ready for a recipe of easy steps to create for quick, simple, delicious, and meal to be done in about 45 minutes.

The ingredients to making this recipe happen are key to gaining the desired results of deliciousness to come! All you need are 2 pt. of cherry tomatoes  small enough to cover the whole skillet to cover the 1 block of Feta cheese as if it looks like a decoration. You would need to bring the artistic culinary chef side of you with the help of the ingredients crushed up red pepper flakes, 1 quartered shallot, ½ C of extra olive oil, and 3 sprigs to make it stick out like art. Obviously you need 10 oz. pasta on top of the layers of cherry tomatoes, Feta block, while some ingredients are off with zest of lemon juice and some pinch of salt.

You are going to need to do some work to make this food that is currently calling to you as you are reading this. The steps involve turning the music on, while dancing to the jam by preheating the oven to 400 degrees, put many of the cherry tomatoes in the oven skillet with gallot, and garlics together while being drizzled with most of the olive oil. You would sprinkle the red peppers over all top of the tomatoes while placing the feta block in the middle of all of the cherry tomatoes. Drizzle the rest of the olive oil while being creative with the thymes all over the tomatoes enough to want to make culinary chefs jealous of your creation in the end. You should place it into the hellish depths of fires oven for 40 to 45 as you bask in what’s to come. You should start boiling hot water in the pot, save some pasta water, drain the pasta, and pull the food out of the oven. Time to smash the feta and the tomatoes together as one with a fork while putting the pasta into them while adding the pasta water if it gets dry and season it with a bit of salt. Baked Feta Pasta equals simple deliciousness of quick and go.

A single Tik-Tok video from the blogger Mackenzie Smith who has 3 million viewers from showing this recipe, while 52 million people sees this trending and more on Tik-Tok. Many people were asking her what is wrong with her, many culinary artists and chefs just all disagree with her ways of cooking this recipe. Many people’s minds have gone bonkers on how this works, and some just say this isn’t a recipe at all. But she created this to make a simpler way for people to eat Baked Feta Pasta. If you are someone who doesn’t like to make 2 hours long meals, just want a quick short dinner for meals, or college students who want to make a simple easy homemade dinner to feel like you are home in some way. Watch the video if you rather see than just read too, https://youtu.be/mqa6ji-MZQA. Cook, dance, sprinkle, drizzle, mash, and just eat away even if it feels unusual!