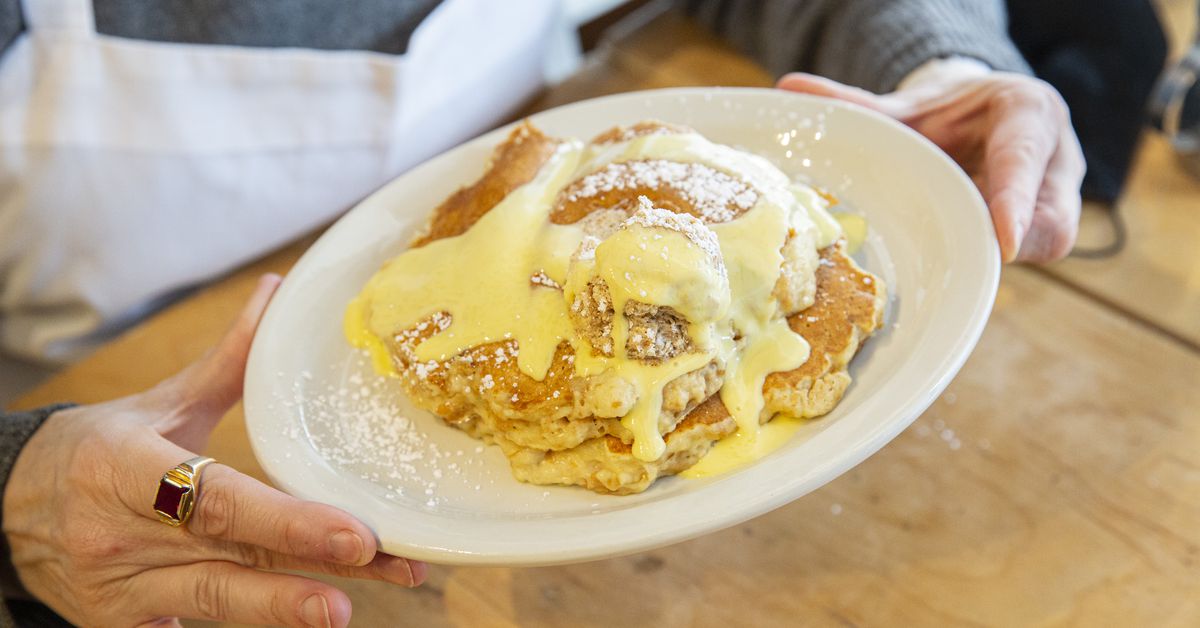 What’s cookin’ in and around Chicago? Here’s a closer look at one of the area’s delicious dishes you don’t want to miss.

When owner Lisa Santos opened Southport Grocery and Cafe 18 years ago, she didn’t know what to expect. She was newly married and quit her downtown job as a CPA to pursue her passion of cooking with no guarantee it was going to work out.

The first day was steady, but Santos remembers returning home exhausted that night filled with doubt.

“We were so busy… and I remember laying in bed at night thinking, ‘We’re never going to make it, it wasn’t busy enough and I can’t imagine we would be getting busier,’” Santos said.

But the neighborhood kept flocking to her cafe and store, located near the corner of Addison Street and Southport Avenue, for lunch and dinner. And many of her returning patrons started to ask Santos to serve breakfast, too.

Santos decided to give it a shot one weekend and put her bread-pudding pancakes on the menus as a special.

It was hit. One man actually ordered two stacks of three pancakes and at them both “because he was afraid we would never have them back,” Santos said.

That was enough for Santos.

Several other favored dishes have come and go over the years, but the bread-pudding pancakes have remained a mainstay.

The best way to describe them?

The clincher for these cakes is the finishing touches, according to Santos. The stack of traditional hotcakes filled with cubed homestyle white bread is topped with cinnamon-sugar butter and a rich vanilla anglaise sauce that Santos whips up every few days “because you want it to be fresh, too, of course.”

“What a lot of people do is you can order just a whole order of them [and share], but some people will order their savory breakfast and then they’ll order of one side of a pancake and they treat it like desserts,” said Santos, a Milwaukee native who moved to Chicago in 1988.

Santos shared the full recipe in a 2012 blog. She’s simplified it even more after that — selling the boxed pancake mix in her store.

The anglaise sauce, which is a tedious and skillful process, is the hardest part of making the sweet treats, Santo said. However, she did offer a hack for achieving a similar flavor and consistency at home: “Buy a pint of Haagen-Dazs vanilla ice cream and melt it.”

“If we gave people the recipe to make [it], we know some people will make an anglaise sauce, but you have to separate eggs, and you have to whisk them over a water bath, it’s not your entry-level type of cooking,” she added.

While the melted ice cream trick is not quite the same as the velvety sauce one would get fresh at Southport Grocery and Cafe, it works.

Got a favorite dish from a Chicago-area restaurant? Let us know via email at: [email protected]