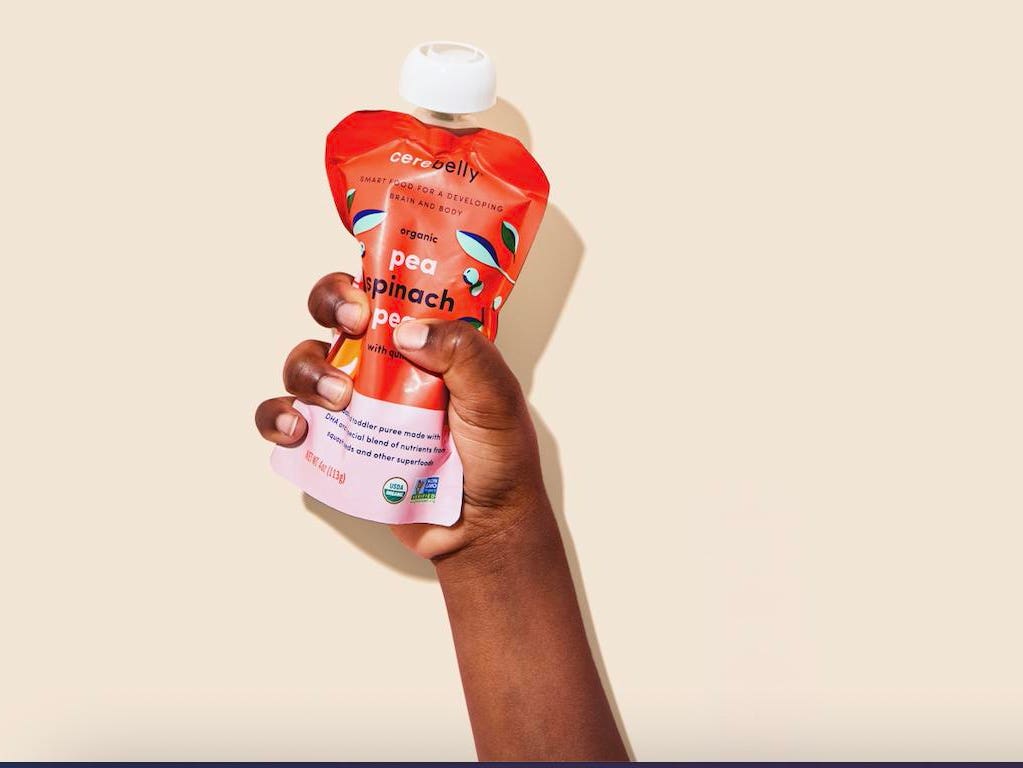 In February 2021, a shocking Congressional report revealed the presence of harmful toxins in baby food from seven of the leading brands on the market including Gerber, Happy Family, Beech Nut, Earth’s Best, Plum Organics, Parents Choice, and Sprout. All companies sell products tainted with dangerous amounts of lead, arsenic and cadmium. According to the report, the developing brains of babies and young children are uniquely vulnerable to these toxic chemicals, which can cause lowered IQ, problems in school, and criminal behavior later in life.

In contrast, Cerebelly – which was cofounded by a practicing neurosurgeon, developmental neurobiologist, and mother of three, Dr. Teresa Purzner, MD, PhD – scrutinizes each ingredient in its line of baby foods and children’s snacks to ensure that they do not contain toxins or heavy metals. The brand is committed to nourishing kids’ minds and bodies by keeping science and transparency at its core. Its products are the only baby foods on the market with meaningful amounts of nutrients that science shows babies’ brains need, combining up-to-date early childhood nutrition with developmental neuroscience.

After the birth of her first child, Purzner realized that parents were craving innovation and transparency from the baby food industry. She examined the grocery store shelves and found that they offered tons of products loaded with heavy metals and sugar. Cerebelly reduces sugar by putting veggies first on the ingredients list. It is the first children’s food brand to receive the Clean Label Project’s Purity Award, which is given only for products that are tested for over 400 contaminants and heavy metals. All Cerebelly products are non-GMO, 100% plant derived, dairy-free, gluten-free, and with no added sugars.

Launched in 2019, Cerebelly is currently sold online and in over 4,000 retail locations nationwide, including Target, Whole Foods, and Kroger. In January 2021, Smart Bars sold out entirely within 40 minutes after a restock of all flavors, and then quickly acquired a 1000-person waitlist.

It was becoming a mother that inspired Purzner to found Cerebelly. “Having spent so many years studying early brain development at Stanford, I understood the importance of nutrition on early brain health and had in mind key nutrients I wanted to find in the rows of pouches I faced in the baby food aisle,” she says. “Unfortunately, as I turned over pouch after pouch, instead of finding the nutrient-dense vegetables I saw pictured on the front of the pouch, I discovered ingredient lists that started with sugar-dense fruit, and nutritional panels with zero percent of the daily requirement of the great majority of the nutrients needed for proper brain development and health. It became clear that there existed a major gap between what we know we should be feeding our children in their earliest years and what was available on the shelves.”

Even worse, third party research has shown that many of these products contain harmful heavy metals like lead, which is detrimental to developing minds and bodies. So, Purzner pulled together a team of the best pediatric nutritionists and dieticians she had met at Stanford, and together they came up with delicious foods for babies that also have eight times more nutrition than the average baby food brands on shelves. Each age-optimized serving contains 15 to 18 brain-supporting nutrients, compared to top selling organic baby food competitors that average only two nutrients.

Purzner faces many challenges as an entrepreneur, especially trying to balance all the demands on her time. Yet she says she feels “a deep sense of satisfaction” as a result of having followed this career path. “The best, most robust professional happiness comes when you’re fighting against a real problem with a group of talented and honest people. Being responsible for the alleviation of suffering or the spark of hope is something magical.”

During the Covid-19 pandemic, consumers began to focus even more on wanting highly nutritious, toxin-free, shelf-stable foods. As part of Cerebelly’s dedication to accessibility, the brand fights to bring down its prices despite premium ingredients. The company also set up a partnership with Baby2Baby, a nonprofit that provides baby products to parents in need.

“Truthfully, I’m very hesitant to give young people advice because I really do think what works for one person won’t work for another,” Purzner says. “I guess finding your best job is not unlike finding an amazing spouse – some people just luck into it, some people wouldn’t know if it hit them in the face, most of us look around and try a few out before committing! Usually, the better you know yourself, the better you’ll be at making the right choice. What’s for sure is that the perfect match for one person is not the perfect match for another. So maybe that’s my advice: listen carefully to a small number of wise people who know you well, but at the end of the day, it’s worth the time to get to know yourself.”