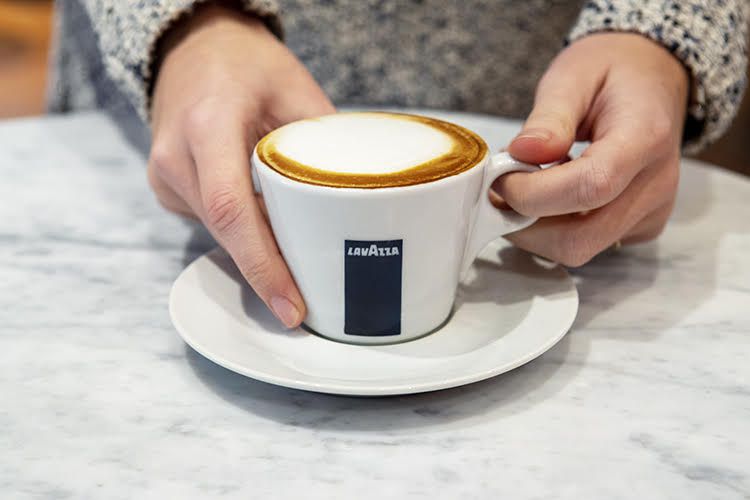 Foodies, the final part of Eataly is finished.

The cafe was designed to be “the main entrance to Eataly,” says Alex Saper, Eataly USA business partner. Its opening was delayed due to a fire in an out-of-service escalator. The grocery section of Eataly and the restaurants within it opened Dec. 9, and the cafe is the one remaining element.

All together, Eataly is intended to let Texans feel like part-time Italians, if only for an hour or two.

Caffè Lavazza is inspired by Italian coffee bars. “You can go in the morning and get a wonderful cornetti [a croissant] and a cappuccino — hopefully one of the best in Dallas. It’s really an all-day experience,” Saper says. “In the afternoon, you can get sandwiches and salads. If you want to come after lunch, you can get a glass of wine.”

Customers can stay for a short time or a long time, which follows the tradition of many Italians: Some toss back an espresso and move on. Others linger over coffee and small bites.

The cafe is named for Eataly’s partnership with Lavazza, an Italian coffee company. (Perhaps you can picture the logo on tiny espresso cups; they’re used around the world.) Lavazza is named for its creator Luigi Lavazza, whose coffee business dates to 1895.

Saper says the Lavazza name is “synonymous with Italian coffee.”

The cafe will sell a new menu item “developed specifically for Dallas,” Saper says: la torre. It’s a tower of food served on a tiered tray for $24. Items may include Neapolitan rum cake, tiny pizzas, slices of sandwiches and sweet and salty bites.

Customers should keep an eye on the little black board in the cafe. There’s a tradition in Italy where someone having a good day will buy a caffè sospeso — an extra coffee intended to be given to the next person who comes into the shop.

If someone has purchased a pay-it-forward coffee at Eataly in Dallas, it’ll be noted on the black board and you can snag a coffee for free. That’s a pro tip.

Eataly will match the amount of any caffè sospeso purchased on May 7, 2021, and donate that money to The Family Place.

After Eataly’s debut in Dallas, Raffaele Piarulli, executive vice president of Eataly North America, called it “one of the most meaningful achievements in the history of our U.S. expansion.” The company has stores in New York, Chicago, Boston, Los Angeles and Las Vegas, and the Dallas shop remains the only one in Texas. Saper says his team is interested in expanding to other Texas cities, but no firm plans are set yet.

“I love Dallas, it’s such an incredible city for us,” Saper says. “It’s just great to complete the project and be able to say we have a store in Dallas that people seem to love.”

Caffè Lavazza, located on the first floor of Eataly, is at 8687 N. Central Expressway, Dallas, in NorthPark Center. Caffè Lavazza opens at 5 p.m. May 6, 2021.