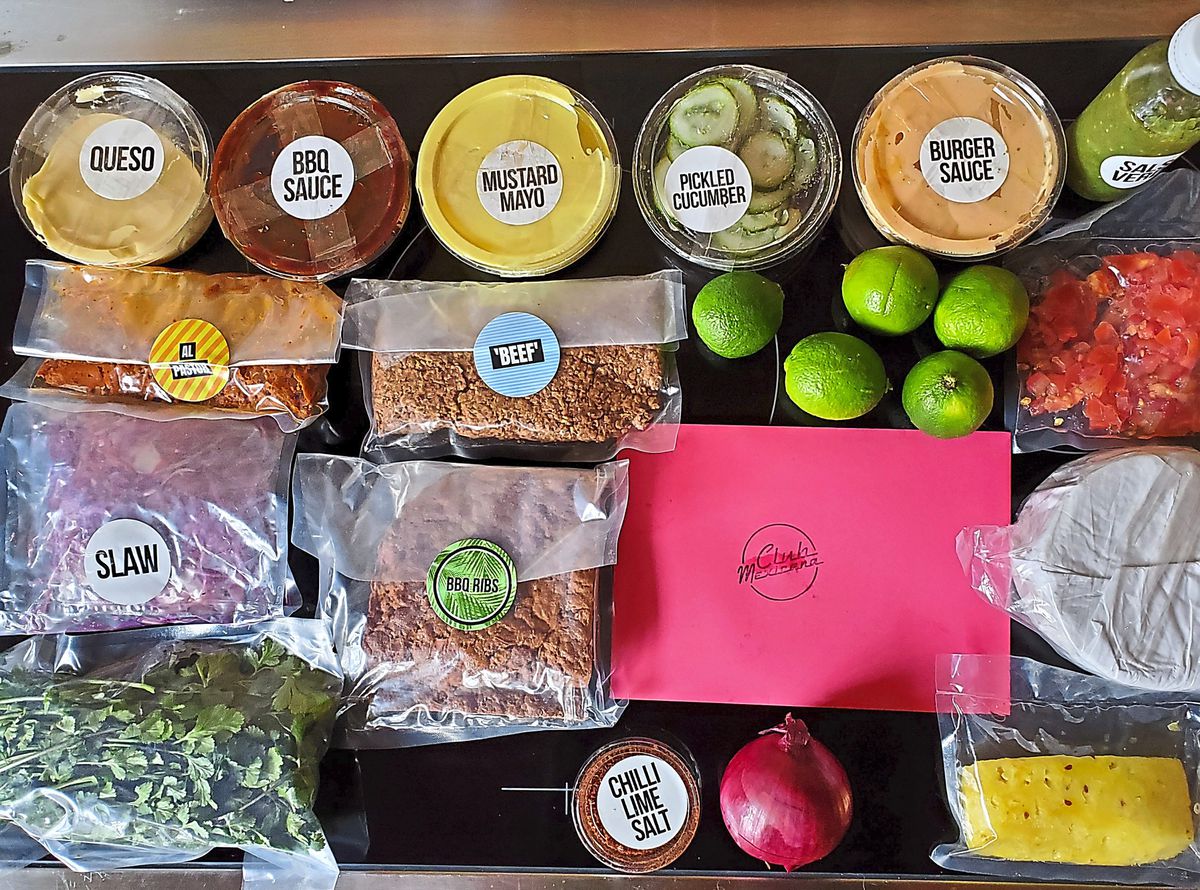 There appears to be an error on the webpage. It’s almost as delicious as the food that’s delivered to the door.

On Club Mexicana’s Megabox Taco Kit it describes a stack of food that is basically a party, rather than a dinner. And above all of that, it promises this: 100% vegan – 100% delicious! I’ve cut and copied that from their website, just to make sure.

BBQ Short Ribs – sounds like an animal died to make us happy.

Except, it actually is vegan. Club Mexicana is a 100% vegan kitchen and their ‘meat’ products are actually made from stuff like soya.

It had me fooled. Slather it with a little BBQ sauce and you’d get away with it being meat – for those meat eaters among us. Win-Win. The vegans are happy, the meat-eaters can’t tell the difference.

Let’s skip the theory and get straight into the food – the food, glorious food.

The Megabox is one of Britain’s best boxes; and if you’re into Mexican food, it’s probably the best. Hot and sweet, creamy and sharp, sour and rich, crunchy and soft, hot and cold, spicy and mild – it’s a carnival of flavours, a riotous party of fruit and ‘meat’, vegetable and herbs, sauces and starch.

Ingredients are the key to good food and while so many scrimp, looking to save a few percentage points here and there, Club Mexicana doesn’t hold back.

There’s five fresh limes, a bunch of just-picked coriander, fresh pineapple – everything designed to give the tacos an every hit of flavour.

The packaging and service were all fine. A DIY taco kit was delivered to the door, instructions were clear, small tubs clearly labelled. From nought to Taco Party took about 30 minutes.

A mound of pulled BBQ rib meat – vegan style, obvs – was slathered with BBQ sauce and popped into a 200C oven before being torn apart and shredded onto a taco.

While that was cooking, salsas were made. Limes were squeezed, onions finely chopped and coriander cut to within an inch of its verdant, aromatic life. Delicious. Diced tomatoes, provided in the kit, were added to one salsa while the pickles, sauces and salt were laid out.

The Al Pastor – like really spicy pork kebab meat – was warmed, the spiced ‘beef’ – a burger that never made it into a disc-shape but does, of course, contain no actual meat – heated up, a hot pan welcomed a stack of tacos.

As the heat forced hot air bubbles to rise, our anticipation grew. And then, with the delight of kids on a pancake evening, we piled them high.

The Megabox came with three different recipes. Burger sauce, a mustard mayo, pickled cucumber and a thick cheese sauce were piled onto a hot taco as ground ‘beef’ rained down into the pool of flavour. It was folded over once and dispatched.

Sauces ran down fingers, tastebuds danced a merry jig and beads of sweat may have formed as the chilli lime salt kicked in. Absolutely brilliant.

An Al Pastor taco was even better. A quarter of a fresh pineapple was charred in a pan until the exterior had grown brown and caramelised before shredded spicy ‘pork’ was dropped into the taco.

One of the two salsas was scattered all over it, the lime soaking into the taco, before a drizzle of salsa verde completed the dish – with a little chilli lime salt just because. The results were electrifying.

The lime juice provided sweet acidulation, the al pastor plenty of fire, the salsa verde and fresh salsa made as fresh as a daisy. Food doesn’t get much better.

My partner’s favourite was the vegan BBQ Short Ribs. Thick globs of BBQ sauce had almost burned in the oven, delivering an intense hit of sweet, sticky, slightly acid thunder.

Pickled cucumber was like the mad raver at a party, while slaw provided crunch and colour.

Salsa verde provided a hit of green and after the fabulously fragrant and fruity salsa had added a further layer.

At-home dining has come on in leaps and bounds during the past year. While we started 12 months ago with a pork pie and an apple – no, really, we did – deliveries are now outstanding.

The riotous flavours of Club Mexicana’s offering was underpinned by the quality of the ingredients inside.

It was as though we’d walked into some Mexican Guana Juato deli and taken a load of ingredients straight off the shelf, picked that very morning.

There was no ceremony and no pomp and circumstance, just a fast-track highway of flavour that punched harder than Dillian Whyte.

And to think; we were saving the world by eating vegan. Ah, sometimes it’s great to live your best life while helping others.

We’re approaching a fork in the road where restaurants resume something approximating normal service.

In the weeks ahead, alfresco dining will take place across the region as cash-strapped operators look to get money in the till.

It remains unclear whether or not the flood of at-home dinners will continue. It might be a safe bet to assume some will.

There are few purveyors of steak and chips so good as Hawksmoor, who deliver door to door. And it’s hard to think of a Mexican restaurant in our region that’s a patch on Club Mexicana.

I’m not sure any match the class, fun and bright, zingy, can-can-dancing flavours of the fantastically meaty vegan tacos.

Lockdown has been the strangest time and we might reasonably hope that when it comes to an end – and that’s a permanent end, not a lock-unlock-lock-again-thing – there’ll still be dining options for those who fancy a dinner in their own kitchen.

A party in a box, a collection of sizzling dirty flavours, a chance to make a fabulous mess while feasting: Club Mexicana was all of those things and much, much more. No hesitation: a straight ten out of ten.