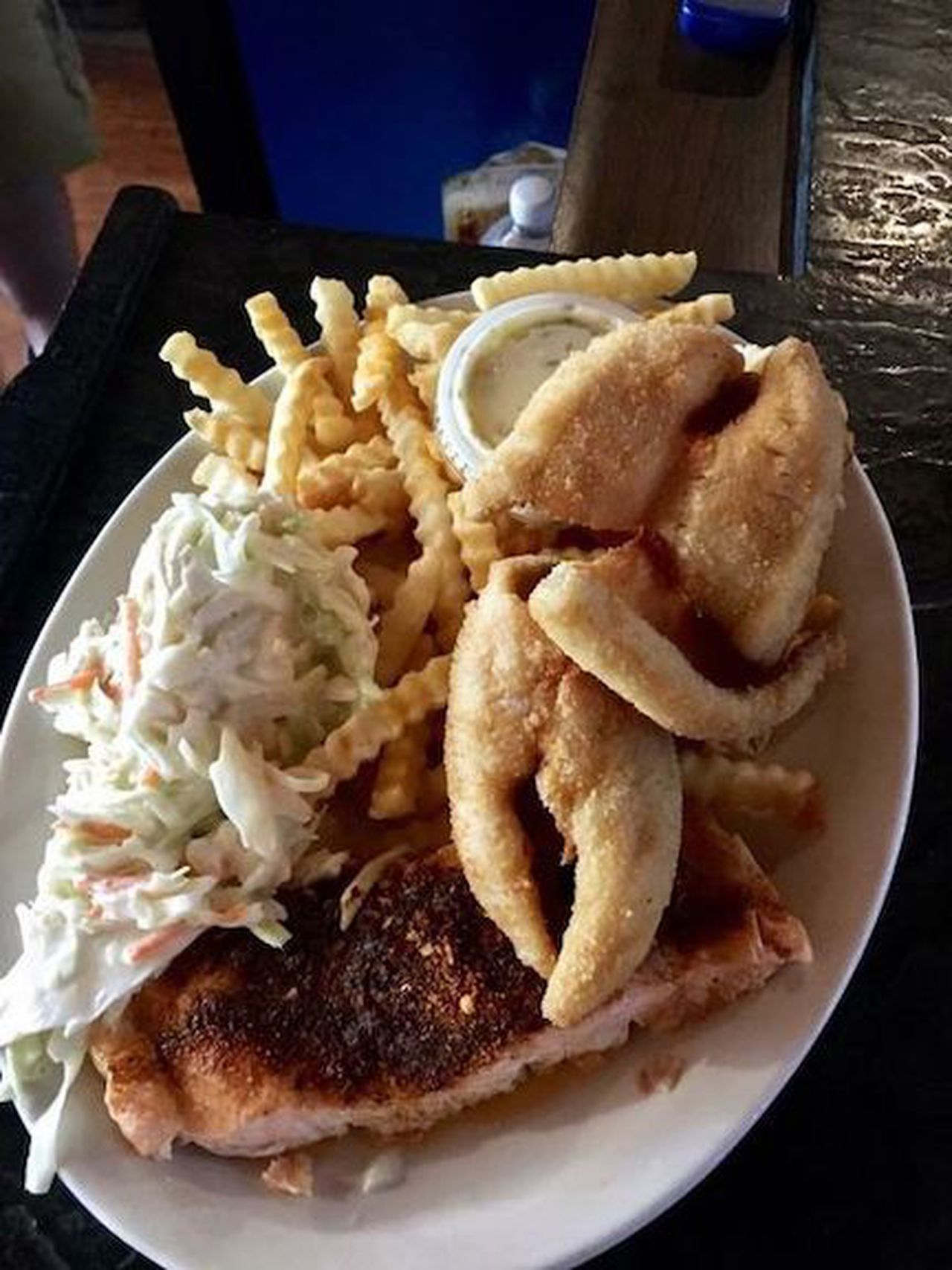 MENOMINEE, MI – Looking for some incredible variety in a Friday fish fry? At Dexter’s in Menominee, you won’t have to look any further, but you will have to travel, possibly quite a distance, maybe even into a another time zone. It will all be worth it once you dig into Dexter’s super fresh fish, prepared in a multitude of ways, and served with homemade sides.

“Friday is for sure the busiest day of the week,” said Dexter’s owner Tom Everard. “If I’m getting the fish fresh, they don’t come in until Thursday. So we serve them Friday. If I do have leftovers, I’ll have people call because they don’t like to wait in line on Friday, so if I have them, I’ll serve them Saturday.”

Every Friday, Dexter’s pulls out all the stops with what they offer. “There’s plenty of options,” Everard said. Fresh fried perch fillets, fresh whitefish (when it’s available), Cajun haddock, walleye (baked or fried), baked salmon and baked cod. The restaurant makes their own beer batter, using a recipe from Everard’s mom. On a busy Friday, the restaurant typically goes through about 300 dinners.

Not a place to rest on their laurels, Dexter’s sometimes mixes things up a bit with their fish fry. “Just about a year ago we came out with the Cajun haddock, which is going really good,” Everard said.

For their fish fry dinners, Dexter’s makes their own coleslaw, baked beans and buys their bread from Stephenson Bakery, also located in Menominee. You get your choice of potato: baked, wedge fry, or homemade potato salad. A slice of rye bread is also included, along with tartar sauce and fresh lemon wedges. Dinners run between $12 and $14 depending on the type of fish you choose.

Prices may seem slightly higher than some places, but with a good reason. The restaurant purchases fish harvested from the Great Lakes whenever they can, and when they say local, they mean really local, like direct from the waters of Green Bay. “Perch, we can only get local a couple of times a year, otherwise most of the time it comes from Lake Erie, on the Canada side,” Everard said. “Whitefish we try getting local.”

Dexter’s is located just six blocks from the shores of Green Bay. A short drive across the town bridge lands you in neighboring Marinette, Wisconsin. They are in the southwestern tip of the Upper Peninsula, and in the Central Time Zone. Please note this, as the Michigan’s Best team has made the time zone mistake multiple times, and we would hate for you to have this problem. It’s quite a hike from downstate, but just an hour from Green Bay, Wisconsin.

Related: How to vote for Michigan’s Best Fish Fry in our 11 regional polls

In addition to their famous fish, Dexter’s is well known for their pizza, including a very popular Chicken Alfredo pizza that features Everard’s special homemade sauce, and is only available on Thursdays. Prime Rib is slow cooked to tender perfection and served on Saturdays and Sundays.

When asked if the restaurant was bedecked with the green and gold of the Packers, Everard said that it’s probably a 60/40 split, which is a bit surprising due to their proximity to Green Bay. That 40% consists of “the Bears, the Lions, and pretty much every other sporting team” he said.

Everard is a lifelong resident of Menominee, and got into the family business when he was in his 20s. “I just never left,” he said. “It’s a small community, everybody basically knows everybody.” During the first restaurant shutdown, “people were super generous,” and the “community came together, stuck together” he said.

“Our customers have been coming for generations and continue to support the business,” Liberty said. “We are so fortunate to have them.”

Dexter’s is generous right back. They host weekly spaghetti dinners for the Menominee High School boys basketball team, the Maroons, and support other local sports teams as well.

“It’s a friendly atmosphere,” Everard said. “Everybody gets taken care of, everybody gets treated the same. It’s pretty nice.” I said to Everard that it sounds like a typical U.P. place. “Yep,” he said. “You hit it right on the head there.”

Fish fry is available on Fridays, year round. If there is any leftover, they’ll serve it up on Saturday.

***Please note: Dexter’s is in the Central Time Zone***

It’s a “Drive By Fish Fry” this year at St. Mary’s Pinckney

Tell us where to find Michigan’s Best Fish Fry

Michigan’s Best Outdoor Dining: See winners from across the state