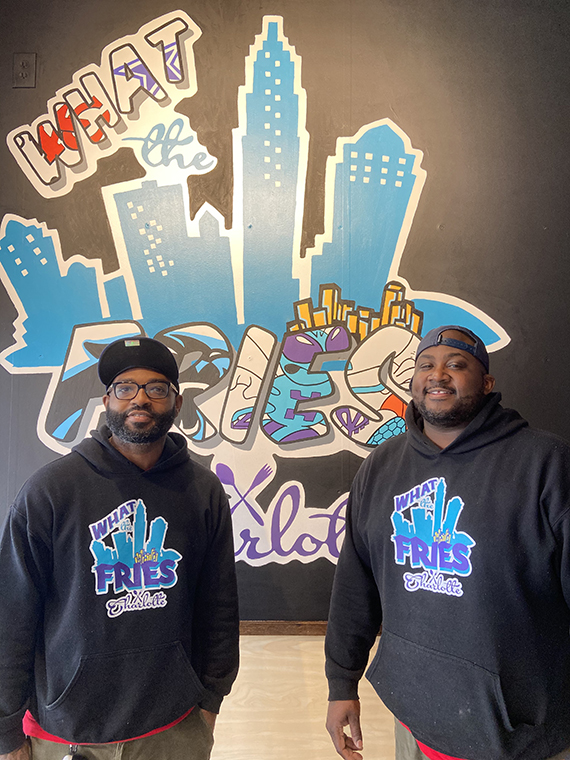 The chefs and co-owners of What the Fries food truck, which serves hand-cut fries with a twist, will open a stand-alone restaurant on March 23 at 11 a.m. at 10707 Park Road, Suite F. The restaurant, which was previously a Cici’s Pizza, will operate Tuesday-Saturday from 11 a.m.-8 p.m.

Operating a 3,420-square foot space with an intended seating capacity of 100 people allows for physical distancing. Dine-in will be offered at 50% capacity to adhere to North Carolina’s current COVID-19 guidelines. To-go orders will be available when placed on site and online ordering and third party delivery will be added in the future. Digital payment options are also available.

“It is like an extension of the food truck into a building with a little more our vibe,” Barnes said.

Said Williams: “We felt like the space just fell in our laps. I feel like it’s a prime location, because we are right next to [Carolina Place] mall, right next to the [Atrium Health Pineville] hospital.”

The food truck component will take a brief hiatus as Barnes and Williams focus on getting the restaurant up and running. They are in the process of finding people to operate the food truck.

“We are actually looking for people to run the food truck for us,” Williams said. “We are looking for people who have a mindset like us—that want to bring the same quality that we brought on the truck because we don’t want to send the truck out with people that don’t really want to work. We are going to take a break from the truck and just do the restaurant for a little while, and then maybe like a few months down the road, get the truck back rolling.”

Barnes and Williams launched the truck 13 months after founding What the Fries catering company, but their journey began in 2004 when they moved to Charlotte to attend Johnson & Wales University. The classmates became roommates and ultimately best friends and business partners. After auditioning for Food Network’s “The Great Food Truck Race” in 2014 only to miss the cut, they turned bought a retired FedEx truck for $3,000 and turned it into one of Charlotte’s more popular food trucks.

What the Fries announced it would open a restaurant in December, a few months after celebrating the food truck’s five-year anniversary. Social media contributes to their success, particularly Instagram, where they have over 40,000 followers. They utilized the platform to post where they would be, pivoting to neighborhoods throughout the pandemic instead of business parks, as customers switched to working from home.

“Social media has really boosted us businesswise,” Williams said. “That’s another reason why we made this step, because even during the pandemic when we were going to these neighborhoods, they were coming out strong, strong, strong. We felt like we had a good following and everyone was still going to want to come and come out to a bigger space.”

Preparing for opening day has been a long and rewarding road. Putting in a new hood system, which keeps commercial kitchens well-ventilated, was not something the partners expected to tackle. Acquiring the necessary permits also proved challenging.

Not only does having a restaurant offer more space, it gives them an opportunity to see customers experience favorite dishes like lobster mac and cheese fries, as well as new dishes like their wings (seasoned sweet and spicy or with house seasoning), loaded fry wraps (signature loaded fries stuffed into a wrap) and fresh cut chips.

“We are looking forward to finally seeing everybody enjoy the food—that’s a big thing,” Barnes said. “Being on a food truck, you never see people eat your food for the most part. They might duck off in their car somewhere or go home. Now we can actually just look out and see people enjoy the food. We have always seen the feedback online. Now we can see it ourselves.”

The restaurant décor has hints of red from its previous life as a pizza place, but purple and teal dominates the scene.

“We have always had the Charlotte Hornets’ colors,” Williams said. “We wanted to bring a lot of Charlotte inside the restaurant. We kept a little bit of the red that was already in here, just to bring out more of a pop.”

“[Gist] followed us for a while,” Barnes said. “He came to the truck a few times. We knew him and saw his work. We reached out to him immediately. We told him the idea we had, and he brought it to life for us.”

Barnes and Williams intend to utilize their space behind the main dining room to highlight local artists and business owners.

“It can be jellies, jams—anything,” Barnes said. “It is kind of hard to get into stores sometimes. It’s just a little ground for you to sell a couple items here every couple of weeks. We are looking forward to that.”