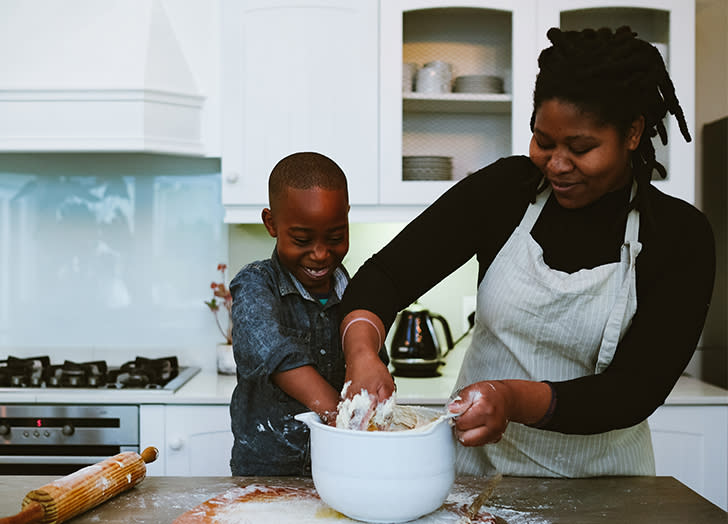 You have a mean craving for cake. You also have a gluten allergy. While it may have been a challenge to find wheat-free flour at the supermarket once upon a time, the hard part now is choosing which one to buy. There are a ton of different options to peruse these days, but only some will give you the results you’re looking for. Here are nine of the best gluten-free flours you can buy for cake, cookies, bread and everything in between.

RELATED: 25 Easy Gluten-Free Desserts That Taste Like the Real Thing

What Is Gluten-Free Flour?

Gluten-free flour can be made from various grains, starches and nuts. It’s free of wheat, which is what gives standard flour its gluten. The one downside to that is that gluten provides structure, chewiness and texture to baked goods. When liquid is added to wheat flour, the proteins in the wheat come alive and attach to each other (that’s gluten!). Once the wet flour meets leavening—whether it’s yeast, baking soda or baking powder—the gluten traps the bubbly carbon dioxide that the leavening produces, which is how baked treats rise.

So, how do gluten-free flours do it without the gluten? At the end of the day, none can replicate the texture of standard flour exactly. But the more you bake with it and track your progress, the closer you’ll get to replicating your favorite treats. Gluten-free baked goods tend to be crumblier than their wheat-based predecessors, so many gluten-free flours contain xanthan gum, a binder that helps batters and doughs stay together. Xanthan gum also helps mimic gluten’s signature chew.

Another important note: All flour has some degree of oil it in that will go rancid over time, but gluten-free flours tend to go bad much quicker than wheat flour. So, buy a reasonably sized bag based on how frequently you’ll be using the flour, and be sure to store it according to package instructions—not all GF flours are shelf stable.

It’s no surprise that this brand is at the top of our list, as it’s beloved not only for its stellar products, but also its endless baking resources and knowledge. This non-GMO pick, made from a blend of rice flour, tapioca starch and potato starch, is great for any recipes that call specifically for gluten-free flour, even those that include yeast. Since it’s free of binding xanthan gum, it doesn’t make a great 1:1 substitute for wheat-based flour, so it’s best for recipes that already call for gluten-free flour. (To substitute regular flour in recipes, King Arthur’s Measure for Measure Gluten-Free Flour is a better choice.)

If your favorite recipe calls for all-purpose flour and you’d like to make it gluten-free, look no further than Bob’s 1-to-1. It’s designed to substitute wheat flour in any recipe, from brownies to muffins to cookies. It’s a blend of sweet white rice flour, whole-grain brown rice flour, whole-grain sorghum flour, tapioca flour and potato starch, plus xanthan gum. So, you won’t need to make any tweaks or add any extra ingredients to bake your favorite goodies. Even better, the flour is made in a totally gluten-free facility and each batch is tested to ensure that it’s wheat free.

Brown rice flour is a popular choice because it’s minimally gritty and super light. Its taste is mild, unlike some other alternatives (ahem, coconut flour). Anthony’s is also non-GMO and made from stone-ground, medium-grain brown rice. Rice flour’s low protein content means that it doesn’t produce the best results in baked goods, as it won’t hold the dough together as well as other options. If you want to use rice flour to bake, pair it with other gluten-free flours that can help the structure. On its own, rice flour is best as a thickener for soups, sauces and stews and as a way to dredge meat for frying or for making noodles, though Anthony’s reviewers also say it’s wonderful for pancakes. Be sure to store it in the fridge for up to five months or in your freezer for up to a year.

If you’re new to gluten-free baking and don’t want to splurge right out of the gate, you can’t beat Krusteaz’s price point. At 13 cents per ounce, this versatile blend of whole-grain sorghum flour, brown rice flour, whole-grain millet flour and xanthan gum is designed to replace wheat-based flour in equal parts. Use it to bake cookies, bread, rolls, pancakes, brownies and beyond.

Made from yucca root, cassava flour is a smooth, powdery substance that’s similar to tapioca flour. It has a mild earthy flavor on its own but tastes more neutral when baked. Otto’s Natural doesn’t add any other flours to the mix either—it’s just pure non-GMO yucca root. Because cassava flour absorbs more liquid than wheat flour, it’s great for baking dense treats like cookies, cakes and brownies rather than yeasted ones like bread or doughnuts. You can also use it for pizza crust, breading or pasta, since those don’t require much lift.

If you don’t have a nut allergy, almond flour is definitely worth a try. It offers a boost of protein and fiber to any recipe, plus has a pretty neutral taste that makes it super versatile. Terrasoul’s almond flour is made from blanched Spanish almonds and has a superfine texture. It’s also free of chemical residues, like propylene oxide, that are common in other almond flours. While you won’t be able to substitute it one for one for wheat flour, adding more flour than what’s called for in a recipe can help you get a stiffer batter or dough. You can also use xanthan gum, egg whites or psyllium husk powder to achieve a sturdier texture. Use almond flour to make cookies, pancakes, quick breads and other baked goods. (If you’re not married to using organic almond flour, Blue Diamond’s is also a solid choice with tons of positive customer reviews.)

Coconut flour has a distinct taste that will come through in whatever you make with it. So, use it in recipes that already call for coconut or recipes that would benefit from its flavor, like macarons or chocolate chip cookies. Coconut flour is also great for tortillas, pancakes and chips. Viva Naturals recommends substituting a ¼ cup of coconut flour and one egg per cup of wheat flour (the protein from the egg will help in the structure department). Coconut flour also has the longest lifespan of just about all gluten-free flours. It will keep in the fridge for up to a year—just don’t store it in the pantry because it’s not shelf-stable.

Not only is buckwheat a great source of protein and fiber, but it also has a wonderful nutty, earthy flavor that can enhance recipes for crackers, soba noodles, pancakes, flatbread and even cake and muffins (baked goods could benefit from mixing it with another flour, like oat or rice). This particular buckwheat flour boasts 30 grams of whole grains in every ¼ cup. Pair it with ingredients that will complement its flavor, like dark chocolate, toasted nuts or mushrooms. (P.S. Arrowhead Mills’s millet flour has even more whole grains at 35 grams per serving.)

It’s made from sorghum, an ancient grain that’s higher in both protein and fiber than wheat. There’s 4 grams of protein and 3 grams of fiber in every ¼ cup of Namaste Foods’s sorghum flour, versus regular AP flour’s 3 grams of protein and ½ gram of fiber. Sorghum is also rich in iron, boasting 8 percent of your daily recommended amount in per serving. It’s great for pizza crust and flatbreads that will benefit from its earthy flavor. Like amaranth and oat flours, sorghum flour can be stored in the fridge or pantry. At room temperature, it’ll keep for about two months—freeze it to double its shelf life.

PureWow may receive a portion of sales from products purchased from this article, which was created independently from PureWow’s editorial and sales departments.