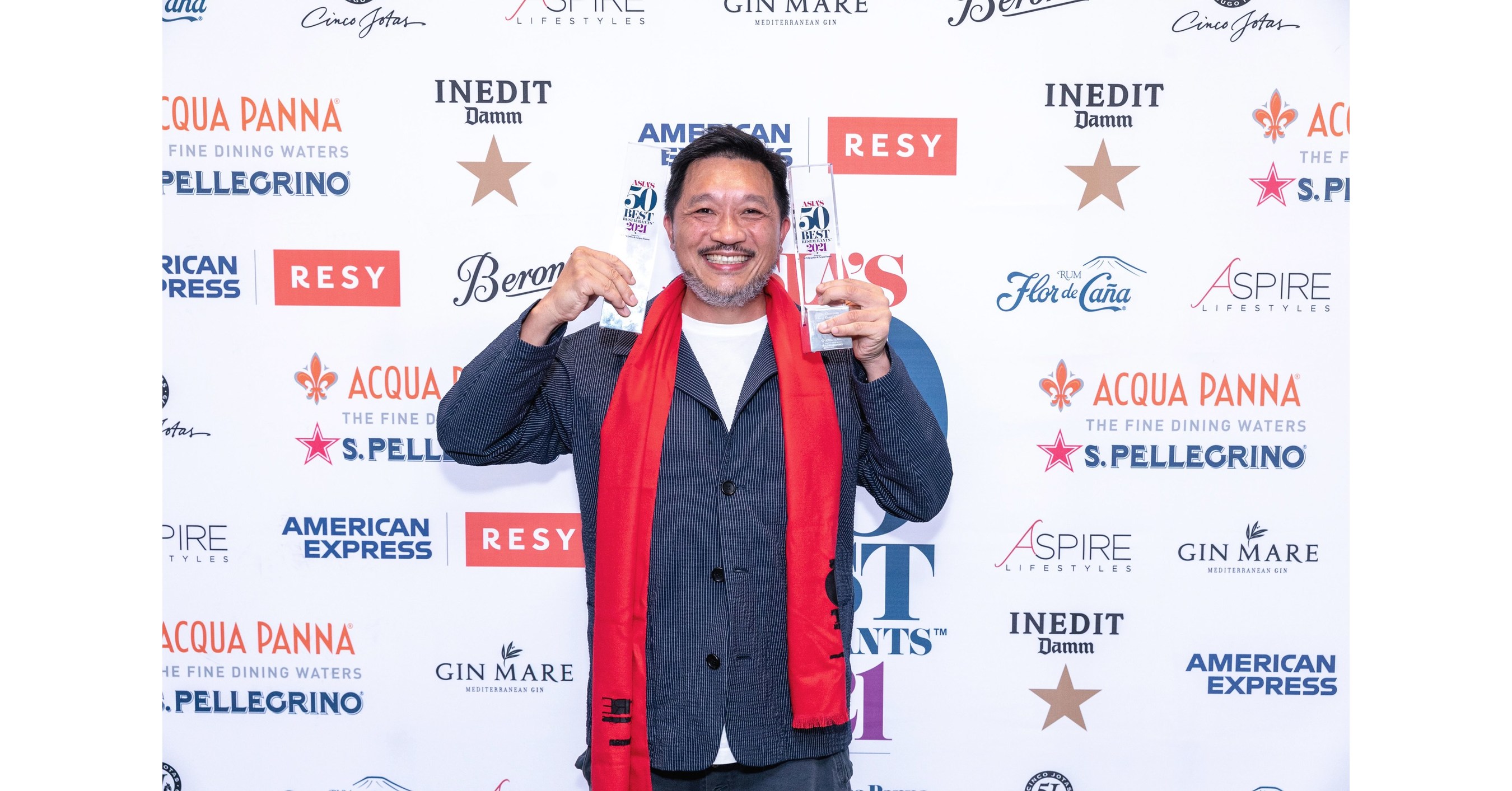 Now in its ninth edition, the 2021 list boasts 11 first-time entries, including a new restaurant in Vietnam, a country last represented in the list in 2013. Hong Kong claims 11 restaurants on the list, followed by Japan with nine and Singapore with eight.

Aside from The Chairman, Hong Kong is also represented by newcomer Mono (No.44) as well as re-entries Caprice (No.28) and Ta Vie (No.38).

Under the leadership and creative artistry of executive chef Vicky Cheng, Hong Kong’s Vea (No.16) is this year’s recipient of the Gin Mare Art of Hospitality Award. The remaining Hong Kong restaurants include Neighborhood (No.17), Belon (No.25), 8½ Otto e Mezzo Bombana (No.33), Amber (No.37), Lung King Heen (No.47) and Seventh Son (No.48).

Mainland China is represented by Fu He Hui (No.22), which maintains its seven-year run on the list, while Macau’s Wing Lei Palace also returns with the No.50 spot on the ranking.

Retaining its No.3 place, Den wins the title of The Best Restaurant in Japan for a fourth successive year while Florilège and Narisawa both maintain their respective places within the top 10, at No.7 and No.9. Climbing an impressive 29 places to No.19, Tokyo’s L’Effervescence is the winner of this year’s Beronia Highest Climber Award.

After holding the No.1 spot for two consecutive years, Odette moves to No.2 while retaining the title of The Best Restaurant in Singapore.

Singapore counts three newcomers to the list. Cloudstreet, fronted by Sri Lankan chef Rishi Naleendra, makes its entrance on the list at No.31, while chef Jason Tan’s intimate 26-seater Euphoria bows at No.41. Chef LG Han’s Labyrinth makes its debut at No.40 and wins the Flor de Caña Sustainable Restaurant Award, selected by 50 Best’s sustainability audit partner Food Made Good Global for its sustainable sourcing policies and work to support the community during the recent pandemic.

Among Thailand’s six entries this year, chef Thitid ‘Ton’ Tassanakajohn has double reason to celebrate. His high-profile Le Du (No.4) is named The Best Restaurant in Thailand for the first time, edging out last year’s title holder Sühring (No.6), while his latest venture, Nusara, debuts at No.20. Sorn (No.11) and Gaa (No.46) round out the Thailand entries.

Perennial favourite Mume rises three places to No.15 to hold the title of The Best Restaurant in Taiwan for a third year. Raw rises 15 places to No.21, closely followed by Logy, Florilège’s sister restaurant in Taipei, making a first-time entry at No.24. JL Studio (No. 26) and Shoun RyuGin (No.45) complete the representation in Taiwan.

Taipei is also home to Asia’s Best Pastry Chef. As pâtissier at Taïrroir, Singapore-born chef Angela Lai is a worthy recipient of the title, having delighted diners with her delicate creations for the last five years.

Climbing four places to No.10, Mingles is named The Best Restaurant in Korea for a sixth consecutive year, while Hansikgonggan places at No.43. South Korea counts two new entries to the list, namely 7th Door (No.34) and Born & Bred (No.36).

Indian Accent (No.18) is awarded The Best Restaurant in India, while Masque in Mumbai, the 2020 recipient of the One To Watch Award, makes its debut on the list at No.32.

Entering the ranking at No.39, Anan Saigon, from award-winning chef Peter Cuong Franklin, secures the title of The Best Restaurant in Vietnam.

For its modern interpretations of Korean culinary traditions, Meta in Singapore claims the American Express One To Watch Award. Celebrated Korean chef Mingoo Kang is this year’s recipient of the Inedit Damm Chefs’ Choice Award, the only award voted for by the chefs of the Asia’s 50 Best Restaurants 2021 list to recognise a peer making a positive impact on the restaurant scene.

William Drew, Director of Content for Asia’s 50 Best Restaurants, says: “In the last year, the restaurant sector has faced extraordinary challenges. At such a time, we are proud to support the restaurants in their recovery by showcasing the region’s creative talents, celebrating the industry’s pioneers and recognising culinary excellence. In conjunction with this year’s list of Asia’s 50 Best Restaurants, along with the extended list of restaurants ranked from 51st to 100th, we were also thrilled to launch the Essence of Asia collection, an initiative that allowed us to champion local heroes and turn the spotlight on even more restaurants than ever before.”

The annual list of Asia’s 50 Best Restaurants is created from the votes of the Asia’s 50 Best Restaurants Academy, an influential group of over 300 leaders made up of food writers and critics, chefs, restaurateurs and regional culinary experts, with a 50/50 gender balance. This year’s vote was adjusted to account for restricted travel opportunities, placing a greater focus on local dining experiences.

50 Best works with professional services consultancy Deloitte as its official independent adjudication partner to help protect the integrity and authenticity of the voting process and the resulting list of Asia’s 50 Best Restaurants. For more details on the Asia’s 50 Best Restaurants voting process, visit:https://www.theworlds50best.com/asia/en/voting/the-voting-system.

2021 marks the launch of the Essence of Asia collection in parallel to this year’s list of Asia’s 50 Best Restaurants. Unveiled in advance of the awards ceremony, the Essence of Asia collection recognises establishments that represent the spirit of Asian gastronomy. This unranked collection turns the spotlight on restaurants that have had a positive impact on their communities and local cuisine, whether during the recent crisis or over a sustained period. Integral to Asia’s culinary ecosystem, these casual restaurants preserve culinary traditions, honour authentic flavours and provide a vital link to their communities.

50 Best for Recovery 2021: Opportunity for Change

The 50 Best organisation will reinforce its commitment to supporting and promoting restaurants and bars across the world through its 50 Best for Recovery 2021 programme. This year also brings opportunities for positive change as the sector rebuilds and remodels itself with a greater focus on inclusivity and long-term sustainability. 50 Best will use its global platform to highlight even more great restaurants and bars worldwide – through its 50 Best lists, special awards, unranked collections and content series – as well as showcase individuals shaping the future of gastronomy through its new 50 Next list, which debuts later this year. 50 Best will take the opportunity in 2021 and beyond to amplify diverse voices and positive messages, foster progressive discussion and cross-border collaboration, and encourage greater gastronomic discovery and exploration.

This release is also available in the following languages:

English, Traditional Chinese and Simplified Chinese. The official language of the press office is English.